As a medical clinic, the Drake Institute developed one of the largest clinical databases utilizing qEEG brain mapping for neurofeedback in the United States. In essence, the qEEG brain mapping process provides a "noninvasive window into brain functioning" to let clinicians identify the source of symptoms or dysregulation in the brain. At the Drake Institute, our clinicians use this information to establish maximally effective neurofeedback treatment protocols for helping our patients improve their quality of life without having to rely on the use of drugs.

QEEG brain mapping is analogous to a physician doing a bacterial culture on a patient with an infection to determine which antibiotic would best treat that infection. In addition, the brain map tells us if the symptoms are neurologically based or linked. When symptoms are neurologically linked, then there is a high probability of treatment success using neurofeedback and the Drake Institute's comprehensive FullCare program.

How Does Brain Mapping Work?

19 sensors are placed on the surface of the head and brain wave activity is recorded over those 19 areas. Brain mapping is noninvasive (unlike a SPECT scan or PET scan) and painless. Much like a thermometer, which only records your temperature but does not affect your temperature, the brain map only records the electrical activity of the brain for analysis; it does not actually do anything to the brain itself. Brain map recordings are processed through the FDA-approved normative database for comparison to "normal" results, which allows us to identify any abnormal areas that will require specific attention during neurofeedback treatment.

In a similar way to other laboratory tests in clinical medicine, the qEEG brain map is performed to compare the patient's brain map to normal brain activity for people in their age group. Like a blood test for thyroid functioning, which will reveal if your thyroid hormone levels are within the normal range, low (hypothyroid) or abnormally elevated (hyperthyroid) compared to a patient population with normal thyroid functioning, the brain map process will show if your brain activity is within normal limits, or dysregulated in some way.

Brain mapping is also comparable to a physician performing an EKG (electrocardiogram) on an adult patient suffering chest pain and shortness of breath to determine what’s causing those symptoms. At the Drake Institute, we use the qEEG brain map on patients exhibiting symptoms of ADHD or an Autism Spectrum Disorder that are originating from the brain so that we can determine the underlying cause of those symptoms. When a patient is having symptoms coming from a heart problem, then the physician will evaluate the heart (since it’s the source of symptoms). When patients come to the Drake Institute exhibiting symptoms related to ADHD or an Autism Spectrum Disorder, we’ll perform a similar type of assessment, but we’ll be evaluating the brain (the source of ADHD or Autism Spectrum Disorder symptoms).

The brain mapping process will detect if any area of the brain is dysfunctional or dysregulated. Sometimes, symptoms are caused by an area or areas of the brain that are underactive, showing excessive slow brain waves that cause impaired functioning and symptoms. Conversely, a smaller percentage of patients will exhibit symptoms due to an area or areas of his/her brain that are overstimulated, showing too many fast brain waves. Either abnormality is disruptive to normal or optimal functioning and can cause clinical symptoms.

The brain is made up of many "functional networks" composed of neurons or brain cells working together in synchrony to perform a specialized function. With advances in the neurosciences that are integrated into our brain map analyses, we are also able to see if different functional networks in the brain are functioning within normal limits. This technology is at the leading edge in science and clinical practice today for both brain mapping for ADHD as well as for brain mapping for Autism Spectrum Disorder.

As an example, there are brain networks for regulating attention, executive function (organizing, prioritizing, time management, etc.), working memory, mood, language processing (expressive and receptive), and understanding non-verbal social cues (important in Autism Spectrum Disorder patients). These different networks communicate with each other to share information so the brain can perform complex tasks in an optimal way. The process can be thought of as being analogous to a company with 19 different managers who all need to communicate and coordinate with each other to keep the company running optimally and efficiently. The brain is no different.

Research in the neurosciences has shown that functional connections between brain regions is key for optimal brain functioning. The qEEG brain map analysis measures "Coherence" between different areas, which indicates the health or normalcy of functional communications between these regions of the brain; in other words, it measures how well the different areas of the brain are communicating with each other to perform complex tasks. For example, there needs to be adequate "coherence" connectivity between the attention, auditory processing, and visual processing networks in the brain to be a good reader with proper comprehension.

In ADHD and Autism Spectrum Disorder, symptoms are often the result of a miswiring or dysregulation within a specific brain network, but they could also be the result of some of the networks failing to work together to carry out complex mental functioning or behavioral/emotional control. Though the miswiring/dysregulation can be significant in ADHD, it is typically even more extensive in Autism Spectrum Disorder. The brain is literally functioning in chaos, lacking effective communication between different regions or networks, leading the child to become overwhelmed even by normal demands.

How is Brain Mapping Used in Treatment?

Based on the brain map analysis, neurofeedback protocols are developed that target specific symptoms linked to the functional networks in the brain which have been shown to be abnormal or dysregulated. For example if a child with ADHD has problems with sustaining concentration on non-preferred tasks and the "attention network" on the qEEG brain map analysis shows significant abnormalities, then the neurofeedback treatment will target improving functioning and connections within the "attention network" areas that are weak or disrupted. In addition, we would also direct neurofeedback to work on improving the connections between the attentional network and other relevant networks required to produce optimal brain functioning for concentration.

If the frontal region of the brain shows excessive slow brainwaves and the patient has attentional difficulties, then we have a “match” to help him/her with neurofeedback by training the frontal lobe to regulate more normally for sustained concentration.

Patients with ADHD with similar symptoms of difficulty with sustained concentration, task completion, and/or impaired impulse control will show different imbalances or abnormalities on their individual brain maps that are unique to their brain's dysregulation. The brain map is like a fingerprint of the brain. Consequently, each patient's neurofeedback protocols will be different and individualized to improve their specific dysregulation linked to symptoms.

This is what gives the Drake Institute’s patients the best possibility for long term improvement or resolution of symptoms, which drug-based treatments cannot do. Drugs do not have this level of treatment specificity. In addition, while drugs can and often do provide temporary symptom suppression, they do not help with retraining the brain to self-generate stable, healthier brain wave patterns that will reduce symptoms over the long run. Neurofeedback-based treatments do exactly this, which is why our treatments can generate long-term positive improvement.

How Does Brain Map-Guided Neurofeedback Improve Quality of Life?

It is important for parents to understand that a child or adolescent with ADHD or an Autism Spectrum Disorder does not have the neurophysical capacity to adequately meet some of the normal demands they encounter in their everyday life. This helps explain why they can become emotionally overwhelmed more easily than children with normal brain function, as well as why an ADHD child/adolescent becomes unmotivated to try to complete non-preferred tasks. It is very frustrating for the patient, and an outside observer often doesn't understand nor appreciate that the child's disrupted neurophysical capacity is limiting their ability to self-regulate.

The Drake Institute’s brain map-guided neurofeedback treatment protocols enable the patient to strengthen connections in their brain, resulting in improved efficiency and speed of information processing both within and between networks or regions of the brain. This typically leads to a reduction of negative symptoms. The Drake Institute's brain map-guided neurofeedback treatment program is based on and carries out the principle of clinical medicine being "safe and effective".

Brain mapping for Autism has shown abnormal coherence or connectivity patterns in the language areas of the brain. Thus, one would expect reduced functioning in language development in Autistic children, which is typically a core deficit in Autism. We also frequently find abnormal brain wave patterns and connectivity in the right posterior region of the brain in children/adolescents with an Autism Spectrum Disorder. This is no surprise, as this region of the brain is involved in understanding nonverbal social cues and other people's facial expressions or feelings. For children with an Autism Spectrum Disorder diagnosis, this part of the brain is high-priority for analyzation and then strengthening via treatment should imbalances show up on the brain map. 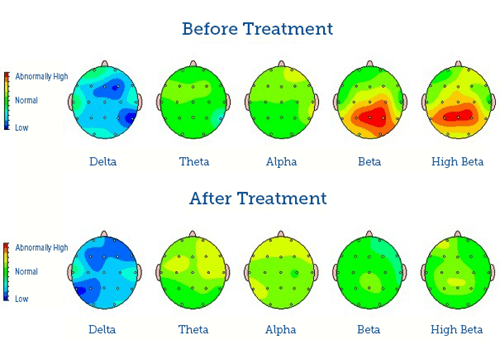 It is a different life experience for a patient when their brain is working normally, as opposed to when it’s operating in a dysregulated fashion.

Without a Brain Mapping, a clinician cannot truly know if the symptoms are neurologically based, or simply psychological/behavioral. If neurological, the brain map pinpoints which brainwave patterns and functional connections are abnormal, as well as where that abnormality exists. Having analyzed thousands of patients’ brain maps at the Drake Institute, we are fortunate to have an extensive, unique clinical treatment database from which we may draw insights to guide more successful patient treatment.

Our Medical Director, David Velkoff M.D. M.A. develops the individualized Drake Institute neurofeedback protocols for each specific patient, and we’re typically able to achieve significant clinical improvement in up to 80% of the people who come to us for help.

To get the help you or a loved one needs, call now to schedule your screening consultation at no charge-call 800-700-4233.